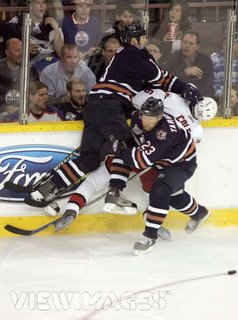 Apparently, while I was desperately scrounging for things to post on this blog, Jim Matheson did some reporting:

The New York Rangers are reportedly checking out Edmonton Oilers defenceman Joni Pitkanen. He may be expendable with a healthy Sheldon Souray, but the Carolina Hurricanes may have a bigger need for the puck-moving blue-liner than the Rangers. And the Hurricanes also have winger Erik Cole, who has big-time speed to dangle. That makes more sense. The difference is that Pitkanen is 24 while Cole is 29 and only has one-year left on his $4 million US a year deal before he's an unrestricted free agent. The Oilers would have to get a draft pick, too, from Carolina because of the age difference and probably some assurance from Cole he'll sign a long-term deal.

I've been pretty consistent on my desire to see Pitkanen return next season, and I already feel we need another veteran defenseman if we're serious about being a contending team. That said, Cole is a tough, mean power forward, and between him and Dustin Penner the Oilers could ice two very good offensive lines.

Chalk me up as a fan of this trade if it's a high draft pick, and Lowe signs a replacement via free agency. Otherwise, let's keep Pitkanen; he has a truckload of talent he didn't display this season. As for Matheson's suggestion that Pitkanen may be expendable if Sheldon Souray is healthy, not only is it untrue (their games are completely different, with the only common thread being the ability to generate points), but there is a lot of IF packed into that statement.