Share All sharing options for: Department of Obvious Statements 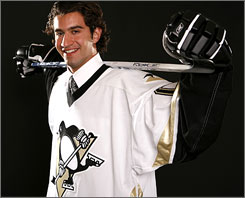 This is Angelo Esposito. In the years prior to the 2007 NHL Entry Draft, he was considered the favourite to be taken with the first overall selection. When draft day finally came, Esposito slipped all the way down to 20th overall. Why? And why is it relevant?

Rob Schremp is the most famous prospect currently in the Edmonton Oilers system. In many ways, his fall at the 2004 draft was similar to that of Esposito. In both cases, fans echoed the early scouting reports on the players - "one of the most skilled players in the draft" is a quote that easily comes to mind.

The reason I compare the two is because they followed similar paths to their draft position, although based on Esposito's track record to date it's arguable that Schremp is the better prospect.

Both had elite seasons in their pre-draft year; Schremp posted 74 points in 65 OHL games, while Esposito managed 98 in 57 QMJHL games. These are amazing numbers in their respective leagues at their respective ages- they compare favourably with players who went on to great success in the NHL.

Both stagnated or stepped back in their draft year- Esposito dropped to 79pts in 60 games, while Schremp posted a virtually identical 75 points in 63 games. These numbers were average at best and it's doubtful if either of these players would have been first round selections were it not for the reputation they had already established in their previous season.

These statistics, to me, show something obvious- the players fell in the draft because they failed to progress in their draft season. Esposito has continued to fall; 69 points in 56 games this season is his ugliest year in the QMJHL; he was more offensively effective as a 17-year old than as a 19-year old. Schremp, on the other hand, rebounded with improved efforts in two years following his draft. He's also improved as a minor-league professional to the point where he should be a shoe-in for an NHL berth next season, although it remains uncertain if that will ahppen in Edmonton.

The important thing to remember about players like Esposito and Schremp (and for that matter, Cherepanov) is that they fall for a reason. In Cherepanov's case, 16 GM's decided that there was another player on the board who was more likely to contribute to their NHL team. This jumps to 19 for Esposito and 24 for Schremp. And no matter what the media says, or what the fans say, I think the judgment of those GM's is far more reliable- after all, their jobs are on the line.