Chris Pronger Did the Oilers a Favour

Share All sharing options for: Chris Pronger Did the Oilers a Favour 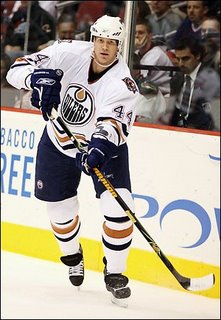 From the category of "Fun articles to look back on'' comes this gem, courtesy of Kevin Lowe and Terry Jones, from November of 2006. Of course, I loved this article even back then, but some googling brought it back to mind, and I thought a refresher might be nice.

Let me pass it over to Jones.

"If Chris Pronger hadn't left, Kevin Lowe may have had to let Ryan Smyth go. Or Ales Hemsky. Or Jarret Stoll. Or somebody."

Thank goodness that Pronger left, than. This way, the Oilers were able to keep Smy... Jarret Stoll. And we know that means a lot. Besides, they were able to take some of the cap savings and sign Sheldon Souray, who, as we all know, has a big shot. Thank you, Chris Pronger, for allowing us to keep all most of our big name stars.

"Sometimes things happen for a reason, hopefully in a couple of years we'll be looking back saying Chris Pronger leaving wasn't a bad thing."

I guess optimism is a good thing. Back to Jones.

"Only a few months after Pronger kicked the city in the gut with his skate on, Lowe can see the big picture, one which is probably coming into focus for Brian Burke about now, too. How is he going keep Pronger and Scott Niedermayer, two $6 million- players, under the same salary cap, past this year?"

In retrospect, Burke had some cap problems. That, combined with a little mismanagement, cost him Dustin Penner and Andy McDonald. On the other hand, Niedermayer now seems likely to retire for good, and Burke has a Stanley Cup ring. All in all, I doubt that swap bothers him. What do you think, Mr. Lowe?

"Pronger's $6.25 million allowed for all those guys like Ales Hemsky, Dwayne Roloson, Jarret Stoll, Shawn Horcoff and Fernando Pisani to get new deals when their contracts were up. Our cap number right now is just under $40 million. Add Pronger's $6.25 and we're over the NHL's $44-million cap. And we still have Ryan to do.''

Hemsky and Horcoff were both signed to bargain contracts that remind me that Lowe does some quality things as GM. Throwing Stoll, Roli and Pisani into the mix is a little bit funny, though (although Stoll at the time was certainly on a reasonable contract; his injury was not forseeable). As for Ryan Smyth, I do not think I need to rehash what happened. Suffice to say, even with Pronger gone, the Oilers would not pay for him.

''Meanwhile Ladislav Smid, the defenceman who came with Joffrey Lupul in the Pronger deal plus draft choices, is playing 23 minutes and looking good. And Edmonton has a group of core players who want to be here, including Hemsky, who signed for six seasons.

Lowe isn't saying he would have been out there trying to trade Chris Pronger right now, because he almost certainly wouldn't.

But he says he can now see that this might all work out for the best down the road - and he damn sure didn't see that the day Pronger asked out of here.''

Ladislav Smid is a very talented defenceman. He is only 22 and certainly has plenty of upside, but at the time Jones was being just a trifle selective in what facts he chose to present. The lack of comment on Lupul is telling.

The second comment, about how Lowe would not actually have been looking to trade Pronger is one I like, because it essentially knocks the article to shreds. If it was not the course of action Lowe would have taken by choice, what on Earth would make him think it might turn out well down the road?

And as for what Lowe didn't see the day Pronger asked out- the reason he didn't see it was because it simply was not there. It was a mirage.

The whole article is, of course, a pile of rationalization, something even Jones seems somewhat conscious of, which probably makes it worse that he goes out of his way to give validation to the comments Lowe made. It is not journalism, not even sports journalism, but the Sun chain has never really been renowned for the quality of writing in its various papers, so I suppose that isnt a big surprise.

As for Lowe's comments, it's hard to blame him for looking for the non-existent silver lining. Still, using the need to sign Ryan Smyth as an argument looks awfully funny now, given the Souray contract and what happend at the 2006-07 trade deadline. It almost seems disingenuous.