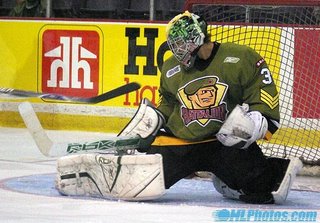 Bryan Pitton today signed a three-year NHL Entry Level Contract with the Oilers. Let's take a look at what the organization now has in the system for goaltenders, along with statistics and league last year:

The number one option among the Oilers goalies at this point is clearly the 28-year old Bjurling who has posted save percentages of .928, .913, .923, and .920 in the SEL. If the Oilers plan to bring him over, as has been reported, than it is a pretty good bet he'll get first crack at the backup job, ala Jussi Markkanen, and that Roloson is out of town. The question than becomes which of Dubnyk/Deslauriers gets the starter's job in Springfield.

If on, the other hand, Bjurling returns to Europe, and Roloson is dealt, Jeff Deslauriers almost certainly will get a chance at the backup position, leaving Dubnyk to play a season as AHL starter, which he almost certainly needs. Pitton could start in the ECHL, and Fisher could be Springfield's seldom-used backup, since at this point he's clearly minor league fodder.

My preference would be for Bjurling to come over, and the organization to send one of Deslauriers/Dubnyk packing, with the other recieving the bulk of AHL minutes. Pitton/Fisher could fight for time in the ECHL, and a minor league vet could be signed to be Springfield's backup.