Because I Don't Want You to Think I Hate Terry...

Share All sharing options for: Because I Don't Want You to Think I Hate Terry... 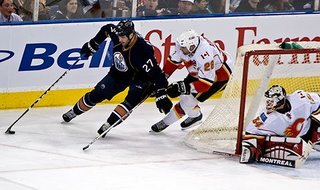 From a different, more select category, this is quite a decent piece by Terry Jones, showcasing as it does some actual journalism, good quotes, and a willingness to hold somebody's (Penner, seen on left) feet to the fire.

Here's a few quotes:
"Dustin Penner didn't participate in yesterday's optional practice. He took the day off.
Which begs the question: How does he take the day off when he took the night before off?
Penner did absolutely nothing for 19 minutes and 13 seconds of ice time while most eyes were on Sidney Crosby.
It wasn't so much that Penner had such an empty effort against the Penguins. He's had several of those this season. It was the contrast to the terrific two games he had in Anaheim and Los Angeles coming into the game."


Thank you. While I don't need to see quite this level of condemnation, it's nice when the guys with a paying gig highlight the bad as well as the good. In fact, I'm so pleasantly surprised by those statements that I'll gloss right over Jones' inclusion of Allan Rourke as a "young gun".

Here's a couple of nice MacTavish quotes on Penner that Jones included:
"I have very high hopes for him long term. There's nothing he can't do. He's a late developer. He has a lot of great Oiler qualities in him. He's developing a work ethic and he has good coachability. He's going to be a good Oiler for a lot of years"

"I very much support him. With the amount of work he's been asked to do off the ice, some nights he doesn't have his legs- I don't want to criticize him right now when he's doing everything we're asking him to do. It's not something you just add water to and it's going to blossom."

Those quotes are gold. It tells us how MacTavish (and, by extension, the organization) view Penner. It tells us that Penner's on board with what the Oilers want him to do, and that he's willing to listen. It gives us hope that Penner will respond to MacTavish.

It's articles like this one that make me occasionally read the Sun's sports page, despite my distaste for a lot of what I see there.