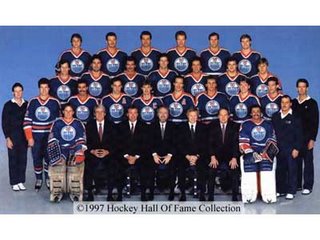 The most irritating comparison this playoff year, in my humble opinion, has been that of the current edition of the Pittsburgh Penguins to the 1983 Edmonton Oilers.

The comparison is wrong.

What I have done is ignored all the generous assumptions regarding talent level, and simply focused on age. What follows is a comparison of the top thirteen forwards and the top six defensemen from the regular season.

Allowing (rather generously) that Crosby and Malkin = Gretzky and Messier, the great big hole in this first comparison should be clear. Marian Hossa, rather than being a young, budding goal scorer, is a veteran mercenary, a player who is likely done after this season. Kurri, in contrast, was a fixture on the Oilers dynasty teams, a player who was integral and grew with the team.

Whitney, the youngest of Pittsburgh's top three, is senior to all three Oilers defenders. Orpik, 27, is an impending UFA. Sergei Gonchar is a cagey veteran unlike any Oiler. As we'll see, all along the blueline the 1983 Oilers were younger.

Linseman, Hughes, Roulston, Lumley, Pouzar, Hunter, Semenko, Habscheid and Lindstrom had and average age of 26, ranging from 19 yr old Habscheid at one end to 31 year old Lindstrom on the other. The Penguins, on the other hand (Sykora, Malone, Talbot, Kennedy, Ruutu, Roberts, Laraque, Taffe and Dupuis) have an average age of 29, ranging from 23 yr old Talbot to 41 yr old Gary Roberts. The core of the Penguins is older, and more experienced, and are consequently less likely to develop to the same extent as the Oilers roster.

The gap here is the same as the forwards. Gregg, Fogolin, Jackson and Lariviere averaged 26 years of age, while Letang, Gill, Scuderi and Eaton average 28 years of age.

Moog (22) and Fuhr (19) stack up against Fleury (22) in age, while Conklin (31) is comparable to neither. Granted, a team only needs one goalie to stick, but Moog was traded for Ranford and parts (Geoff Courtnall), and one of the Oilers major strengths was having two quality goaltenders.

There is a superficial resemblance between the teams at the top end, largely because of the Malkin-Crosby to Gretzky-Messier comparisons. Beyond that, the Oilers were brimming with young talent in every part of their roster, top-to-bottom, while the Penguins supporting cast is much older, and thus much less likely to improve as a group from what they are now. Pittsburgh will have main pieces to build around for as long as Crosby/Malkin play there, likely the next twenty years, but comparing them en masse to the Oilers is simply lazy journalism.