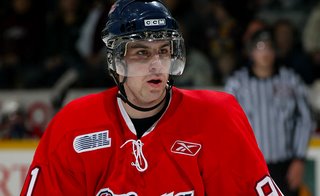 Consequently, let him that thinks he is standing beware that he does not fall.

A good warning against complacency, albeit in a different context. The player on the left is John Tavares, who prior to this season, was the consensus first overall pick in the 2009 NHL Entry Draft.

Tavares' list of accomplishments is already spectacular, despite his youth. He was the youngest player ever drafted into the OHL, by virtue of the "exceptional player rule" that was basically brought in because of Tavares. Last season, as a 16-year old, he bested Wayne Gretzky's record for most goals by a 16-year old, with 72. He also already has a gold medal with Canada's World Junior team.

Despite that, there are warning signs. From The Hockey News' Draft Preview, pg. 62:

In a poll of 15 NHL scouting departments prior to the World Under-18 Championship, nine said they would pick [Victor] Hedman N0. 1 if they had to decide this year, while the other six went with Tavares. Many said it was a coin flip.
A season ago, Tavares broke Wayne Gretzky's junior record for goals by a 16-year-old with 72 and was named CHL MVP.
As an encore, he suffered a 32-goal drop and had what one scout called "an uninspired year"

A quick glance at Tavares' statistics tells much of the story. Tavares had more goals as a 15-year old rookie than he did as a seventeen year old last year. The drop in his playoff statistics is even more noticable: 9GP-7G-12A-19PTS last season to 15GP-3G-13A-16PTS this season.

It isn't unprecedented for players to peak early and then drop off prior to their draft year. It generally leads to a tumble down the draft rankings, too. Rob Schremp, for example, was widely-hailed as a top 5 talent, but he fell to 25th overall, after an exceptionally poor draft year.

Tavares, of course, is a far superior player to Schremp at the same age, and he also has another year before the draft to improve his standing. That said, if he fails to improve, fails to live up to the enormous expectations that have been created by his own talent, then his ranking will continue to drop- and deservedly so.