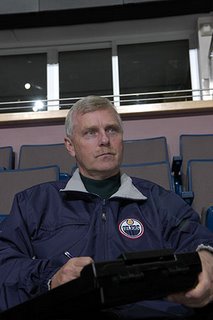 One of the immediate things that changed about the Edmonton Oilers when Kevin Lowe took over as General Manager was the composition of their amateur scouting department. Barry Fraser left as it's head, and several other scouts went to New York with Glen Sather. The current group is as follows, with their respective assignments:

(Note: most of this information came from this article http://oilers.nhl.com/team/app/?service=page&page=NewsPage&articleid=318097, but was also taken from Hockey's Future and assorted newspapers)

Kevin Prendergast, V.P. of Hockey Operations - With the departure of Scott Howson, who seems to have done a fair amount of amateur scouting, Prendergast seems to have been bumped up the organizational ladder. Evidently, he was in charge of the scouts up until September of 2007, but there's good reason to believe he still has significant input.

Stu MacGregor, Head Scout - MacGregor, former GM of the Kamloops Blazers, took over Prendergast's role as the fellow in charge of the scouting department. He was previously based in Kamloops and scouted western Canada/USA for the Oilers since 2000/01, making him a Kevin Lowe hire.

Mike Abbamont, Morey Gare & Dave Semenko, Professional Scouts - Semenko needs no introduction, while Gare was a career minor leaguer who coached for Michigan (WCHA), Estevan (SJHL) and Cowichan (BCJHL), and was also assistant GM for Cowichan. In 1998 he was named an assistant coach with Hamilton, and remained in that position until Lowe bumped him into the pro scouting department in 2001. Abbamont is a career scout who's worked for Ottawa, Washington, Florida, Detroit and NHL Head Office. He was involved in recommending the Luongo/Jokinen for Parrish/Kvasha trade (on the good end), and was a career minor leaguer as a player. He joined the team in August 2005. These three scout NHL/AHL level games, and have little to no involvement with amateur procurement.

Chris McCarthy, Scout - based in Boston, McCarthy covers the eastern U.S., and some Canadian major junior and has been with the Oilers since 1992.

Brad Davis & Kent Hawley, Scouts - Davis and Hawley are based in Ontario. Davis is the son of Lorne Davis, longtime Oilers scout (died in 2007), while Hawley is a former career minor leaguer and a coach in the UHL and CHL. Hawley joined the team in August of 2005. They cover Ontario, the Northern U.S., and Hawley at least also does spot duty in Quebec.

Bob Brown, Scout - another former Blazers GM, Brown covers BC and the WHL.

Kent Nilsson, Scout - Nilsson is the primary European amateur scout for the Edmonton Oilers, and was brought in under Lowe.

Frank Musil, Scout - Musil is the primary European professional scout for the Oilers, although he also does some amateur scouting. He's another one of Lowe's hires.

Pete Peeters, Goaltending coach - when Peeters was hired he also did amateur scouting of goaltenders, and it's possible he still does.

Under Prendergast, the scouts spent the first 6 weeks in their own territories, and than a conference call decided which players were of note and more extensive travelling occurs. Each scout made two trips to Europe, ostensibly to augment the rather understaffed European group.

Over the next few weeks I'm going to try and breakdown the Oilers scouting success under Lowe/Prendergast by region, and hopefully we'll see where they're doing well and where there's room to improve.