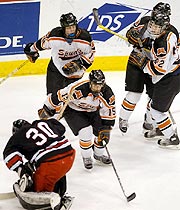 One of the Oilers prospects who really emerged this season is North Dakota Fighting Sioux forward Chris Vande Velde. After scoring 9 points as a rookie, Vande Velde put in 32 as a sophomore. (It should be noted that 7 of those 9 points came in the final 9 games of the season. Thus, Vande Velde started turning the corner in late 2006-07) Granted, he was playing with some pretty good players (Ryan Duncan, T.J. Oshie), but even so this is a nice development for Edmonton. According to the Edmonton Journal (April 10, 2008), Vande Velde will likely be returning to North Dakota for one more season.

From Hockey’s Future:
His strength on the puck is phenomenal, I don’t know anyone who is stronger on the puck than he is. He’s a horse out there, he’s tough to go against in practice! – T.J. Oshie
The one thing that you notice every day practicing with ‘Vandy’ is how well he protects the puck. He’s not a huge guy but he’s a big guy and he uses his body really well down low and if you can get a guy that’s that big who likes to hold onto the puck and make plays it’s really tough to cover. – Taylor Chorney
"Right from his first day here he’s continued to improve. He paid his dues last year but he continued to improve throughout the entire season and at the end of the year an opportunity for him opened up for the last four or five weeks and he took full advantage of that. He became a top 6 forward for us then, he came back this year and picked up right where he left off and just continues to grow and get better as a player. He’s so strong on the puck and he makes very good and intelligent plays. He’s a horse out there; when he has the puck is really tough to take it from him." – Coach Dave Hakstol
"The first thing you look at is, ‘does this kid belong with those two? Does he deserve to be on that line’, and he does." "He’s been a really good compliment to those two players."
Vande Velde’s development curve has the Oilers grinning from ear to ear including Bob Mancini, the development coach, who had nothing to do with Edmonton’s 2005 Draft.
"I was told to go in and look at him because he’d made a step and that we may have a player… and we do," Mancini said. "Here’s a kid that we didn’t expect to make this jump and be who he is. Here’s a kid who now has a chance."
"He’s big and he’s strong but he needs to learn to play with more grit," advised Mancini. "He needs to learn to be better in the defensive zone because that’s not a huge part of his game yet."

As this YouTube video shows (http://youtube.com/watch?v=s9gaMzqJrOo&feature=related), Chris Vande Velde is NHL-ready in at least one area: he’s got all of his sports clichés down pat.